It’s about more than just linking – you must add something

Last evening I was looking around for things to read after burning through my RSS items and decided that I’d skim through the most recent items at the Publish2 newswire. I’ve really enjoyed the last few months of using Publish2 and I think that the power that it holds for collaborative journalism is tremendous. Here’s the thing though: it’s only going to succeed and have a role in the future of journalism if we, the users, make the effort to actually add something to our links.

While perusing the list of recent articles linked by the hundreds (thousands?) of journalists using Publish2 I found that page after page was dominated by links similar to this:

The dominant style of links I found on Publish2

Not to pick on the above user (he’s just an unfortunate example that I happened to find) but that link does nothing. It gives me a 2 word title, no summary, no tags, and nothing relevant to give me an idea of what the article may be about. To me this is useless; even the headline does nothing for me. “Social exercise” could refer to anything from activity on Twitter to a club of suburban walker-moms that use exercise as a means for socializing.

It was rare to find examples like the one below that listed not only the source name, but also included a comment, and various tags. This kind of example benefits everyone. At a glance I’m able to read the title, and if it were to be vague then the comment and tags would make up for it. It’s the difference between throwing a link up there and hoping people click on it and carefully crafting a link and the metadata to go along with it so that people will click on it.

A more useful link on Publish2

With all this talk about how beneficial social activity on the web can be I think that the quality sometimes gets lost in all of the discussion. Sure, it’s great for a journalist or a news organization as a whole to draw attention to links to outside sources that it finds valuable or interesting to its community. This is all for nought though if that linking doesn’t add something of value to the piece. 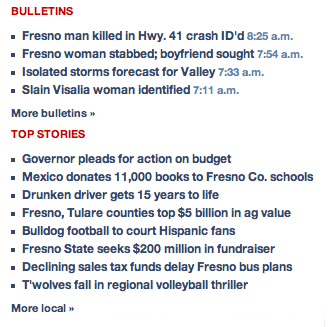 Plain text links are useless on a news site why would they be any better for sharing information?

If readers wanted just a simple title then they would be eating up current newspaper sites like the one pictured at right. This is not the case though and I think that tech-savvy journalists, which I presume to be a large percentage of Publish2’s user base, need to lead by example.

The language of improving online activity is one thing, but these words are not enough what is needed is action. The folks at Publish2 have provided a great tool that could be put to tremendous use by both small and large news organizations; however, it’s on us to not waste this.

If you think that online activity ought to be measured by the volume of links that you push out or the amount of time that you spend on Twitter think again.

Publish2, Twitter, Google Reader, Facebook: all these things are useless unless we take the time to invest energy and thought into creating relationships among people and among data. It’s time to take the issue of news quality to heart and to use linking tools like Publish2 to create what could actually benefit news organizations: a more worthwhile and rich experience for the reader.

I totally agree. I feel like I’m of the few people who add a comment and tags to every one of my links (I also cut out the publication name from the title so that my meta data is clean)

Link journalism is about adding value through curation – @andrewspittle: http://bit.ly/WRT9k

[…] Publish2, Twitter, Google Reader, Facebook: all these things are useless unless we take the time to invest energy and thought into creating relationships among people and among data via andrewspittle.net […]