A few weeks ago I wrote about how I’m using The Hit List as my task app. Before, I used OmniFocus which was good but was just too much for my needs. I don’t need the flexibility perspectives offer, the sync was pretty slow, and the user interface was just not my style. The Hit List is a wonderful change and a really well done app.

A nice interface doesn’t make up for a sub par app. But, when you start with a well designed app like The Hit List a gorgeous interface really makes the app shine. Those small touches I mentioned in the earlier post are just part of the story though.

For example, task entry in the iPhone app is a thing of brilliance. 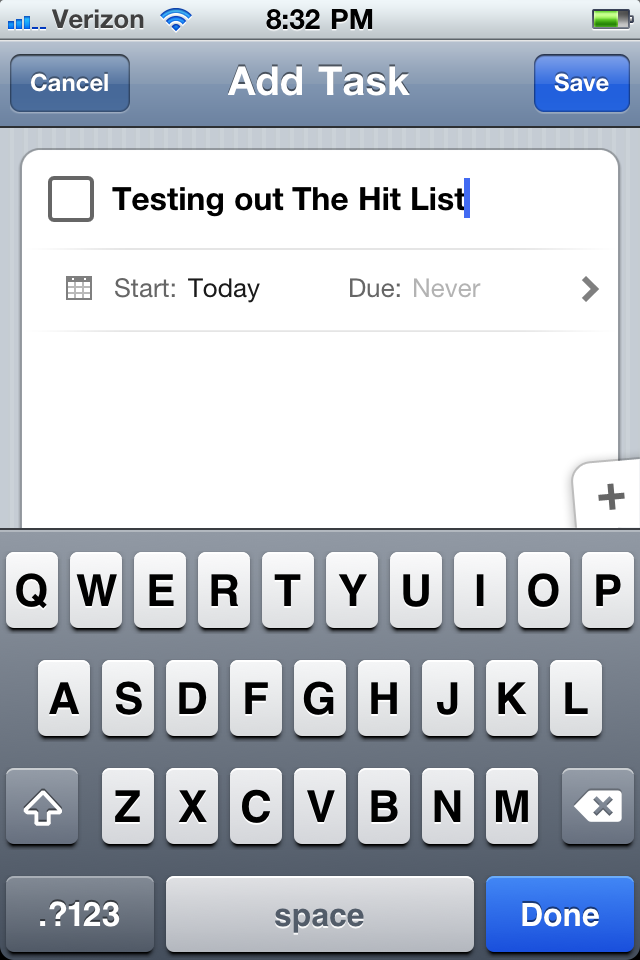 Not only is the adding interface simple but once you start typing one task you get that slick plus button in the bottom right. Want to add another task right away? It’s just a tap away.

This thoughtfulness carries over into the desktop app in more ways than I have time to mention. One of my favorite features though is the ability to view any task as a card. 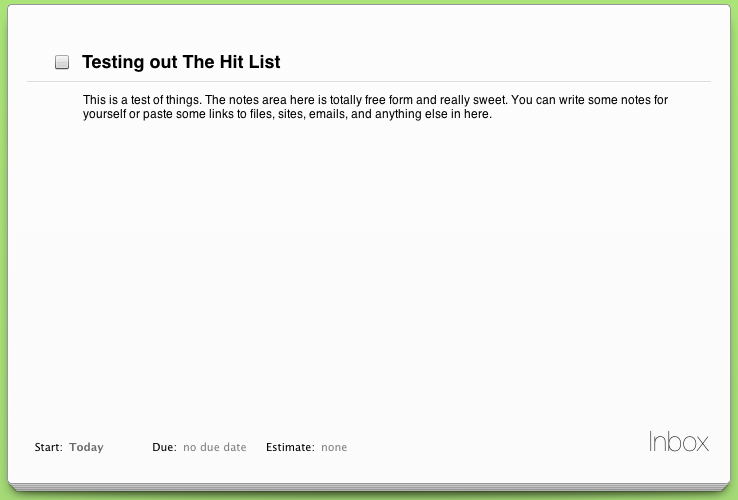 Any task can be viewed like this and you’ll see the title, tags, date information, and a totally free form note field. I use this view way more than I first thought I would. In some ways it’s replaced how I use Notational Velocity. If I have a quick idea for a blog post I can just create a new task and start writing. It’s a great way to just capture information for later.

These two features allow me to really get the most out of The Hit List. I can get right into the app on my iPhone or on my laptop and start right into inputting information.

The whole point of a task app is to not spend gobs of time with it. You’re supposed to spend all that time on the actual tasks. 🙂 So, it’s crucial for an app to make it easy for me to get in, enter my information, cross things off, and get out. That’s exactly what The Hit List does.

Another area where it’s clear Andy Kim spent a lot of time working on is the little things surrounding tasks. The repeating task interface is a great example of this. 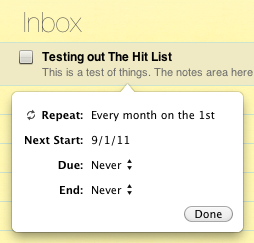 Like other task apps The Hit List uses natural language processing to parse what you mean when repeating a task. For example, if I type “1st” it automatically sets the task to repeat every month of the first.

Similarly typing “Mondays” or “Monday, Tuesday” will, respectively, repeat it on every Monday or every Monday and Tuesday. Just another way The Hit List lets me add tasks without thinking about how to use the app.

The task filing I mentioned in the earlier post is another example of this. It’s seriously incredible. With one or two keystrokes I can select a task and file it where it needs to go. Or, with a couple of keystrokes I can go to any list I have created.1

That barely scratches the surface of my love for this app. Almost every day I find myself amazed by how wonderful it is. It takes just a few minutes to learn the basics of the app and not much more time to really master it.

Sure, it’s a sizable outlay for software but I can’t think of an app that you’d want to spend more on than a task app. It’s your digital brain, invest in it and you’ll get way, way more than $80 of value out of it.

Andy Kim has done a terrific job with this app. As an early beta tester I can say that the 1.0 desktop app and the long-awaited iPhone app have blown away my expectations from when I started using it a few years ago.

I converted to it in less than twelve hours, and I’ve been a religious Remember The Milk user for the last four years.

How “data liberation” friendly is it? I ask this both in the context of explicit import/export capabilities and regarding its format for storing at-rest data. Text is text is text, and I’m hesitant to invest in an app that locks text away in an inaccessible, proprietary way.

Is it friendly to a user handling their own “cloud” syncing? Thanks to iOS’s annoyingly unpluggable architecture, this for now seems to mean “does it support Dropbox?” I’m all for blazing fast sync, but I’m also getting to the point where app-specific syncing is feeling like a game of whack-a-mole… not to mention the effect that such a model has on one’s security & privacy threat surface. Or to put it in a less propeller-head way, I’ve already got a syncing mechanism in place, can I reuse it instead of having to pay for yet another more-different thing that solves the same problem?

I’m a (mostly) satisfied RTM’er like Sir Bachhuber was, and both of your endorsements very much make me consider switching as well… but especially with the price tag involved, I’d like to have an improvement to the deep stuff that matters long-term. Great UI and a desktop app is great, but not enough for me.

There’s an easy export/import option but I’m not sure how easy that format would be to take with you elsewhere.

Syncing two desktop versions can be done with Dropbox but the iOS app wouldn’t sync up without the sync service. In the Google Group Andy’s mentioned looking at iCloud support but for now it’s the paid sync service or nothing for iOS.

There still seems to be many minor workflow issues but my largest concern is that in the past the developer literally disappears for quite some time. No updates, no blogs, no twitter, etc.

Not sure I want to invest $80+ and $20/year for sync if that is going to happen again. Was there ever an explanation for this?

I’m willing to roll the dice and trust him, given how much I like THL.

Ah, great — thanks for sharing the link. I had not seen this yet.

Grant covered the link which is also part of why I’m also willing to trust Andy Kim. Plus, by paying for the apps and the sync service I see it as providing further encouragement to maintain the app.