I recently joined Fletcher Richman on his new Support Leaders podcast to talk about Automattic’s support team. The episode is live now. It’s a quick 38-minute listen where we talk about how I came to work in support, how we work at Automattic, and some of my favorite books.

5QCX: Recruit & Retain The Best Talent. A few weeks back I did a short interview with the folks at Directly about our Happiness team at Automattic. We talked about how we hire for support and how the team operates.

A couple weeks ago I did an interview with Helpshift about customer support and how we wrangle a distributed team at Automattic. They wrote everything up into a nice blog post that was published earlier this week.

My list of books to read is immense, and only keeps growing at a rate which outpaces my reading speed. That means there are many canonical books that I’ve never read. In the last week and a half I picked two of them off the list, and loved both.

The first, A Canticle for Leibowitz, is a wonderful science fiction book written in the late-1950s. The focus is a plausible future where humans have annihilated the vast majority of the world’s population through nuclear weapon strikes. Written knowledge, seen as the foundation for that nuclear arms race, becomes both rare and hated.

The second, Fahrenheit 451, is Ray Bradbury’s classic about book burning and the role knowledge and conversation have (or rather, don’t have) in a dystopian future society. Short read, finished in a day, but really fantastic. 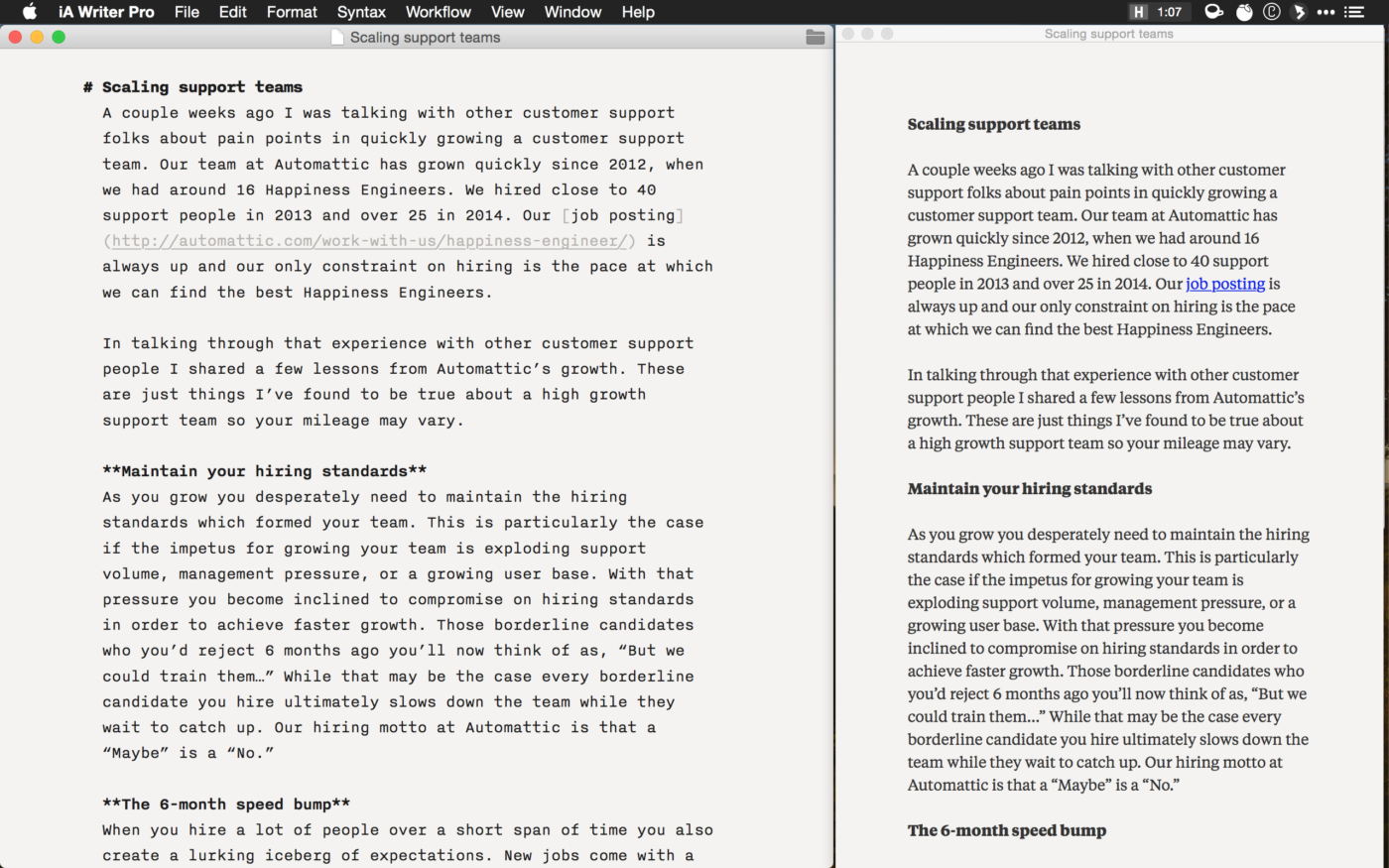 The above layout has given me an effective routine for writing longer posts. It’s iA Writer set up to mimic a dual-panel Markdown editor. Markdown isn’t for everyone but it works really well for how my brain processes text and ideas. The existing gap in iA Writer, for me, is some means of natively hooking it up to my blog.

I read two articles about books and their future this morning. The Millions has a feature on Tumblr’s Reblog Book Club. It’s a refreshing example of creating space for productive discussion online. Om Malik also has an interview up with Matt MacInnis, CEO of Inkling. The idea of unbundling everything we use the book for into its component pieces really appeals to me.

A few days ago I finished Haruki Murakami’s, What I Talk About When I Talk About Running. Loved it; great book. It’s a book about running that, really, is about far more than running. Murakami weaves an engaging memoir together that illustrates the place running has in his life, work, and personal happiness.

An upside to tracking my reading is knowing that, so far, I’ve read 34 books this year. 1 I’ve been aiming for one book a week and am close to that goal; just 7 books short.

Those 34 books break down as 19 non-fiction and 15 fiction. I’ve been on a bit of a sci-fi kick this year, reading 11 books. That will soon be 12 sci-fi books as I’m nearly done with Abaddon’s Gate.

As an aside to the previous link, I wish Matter did a more effective job of showing the work that goes in to their long posts on Medium. Each feature length story is well crafted from a narrative standpoint. Each comes up short, though, in pushing the boundaries of journalism.

In that feature the author writes of how:

Each night I’ve gone through my notes and fact-checked the farmers, doubting what they told me. Even after seeing the land and meeting the people I second-guessed their claims and statistics, only to find, time and again, they were telling the truth.

I wish that work was made transparent. Having grown up outside the Central Valley the narrative had me questioning many aspects of it.

Great journalism doesn’t mean pushing all the fact checking on to the reader. Nor does it mean blindly trusting that the author is presenting things fairly. I ought to be able to read the constructed narrative while simultaneously having the source material at my fingertips to dive in to and draw my own conclusions from.

In Why I Just Asked My Students to Put Their Laptops Away, Clay Shirky writes about banning laptops from his fall seminar class. Toward the end of the piece he writes that:

Computers are not inherent sources of distraction — they can in fact be powerful engines of focus — but latter-day versions have been designed to be, because attention is the substance which makes the whole consumer internet go.

That’s the problem in banning them, though. Productive, non-distracted, work from a computer is a cornerstone of modern work. Removing laptops from the college classroom addresses the symptom while doing nothing for the root cause.

Clay acknowledges in his post that computers can allow for a focus so deep you lose track of time. I agree that’s not inherent, though. Rather, it’s a learned skill. If we’re going to ban laptops from college classrooms because students lack that skill we have to also ask when and where that should be taught. Teaching that level of device literacy needs to happen somewhere in the education system.