A cool thing in Rdio is watching music spread through your network. The digital equivalent of passing CDs around at lunchtime. 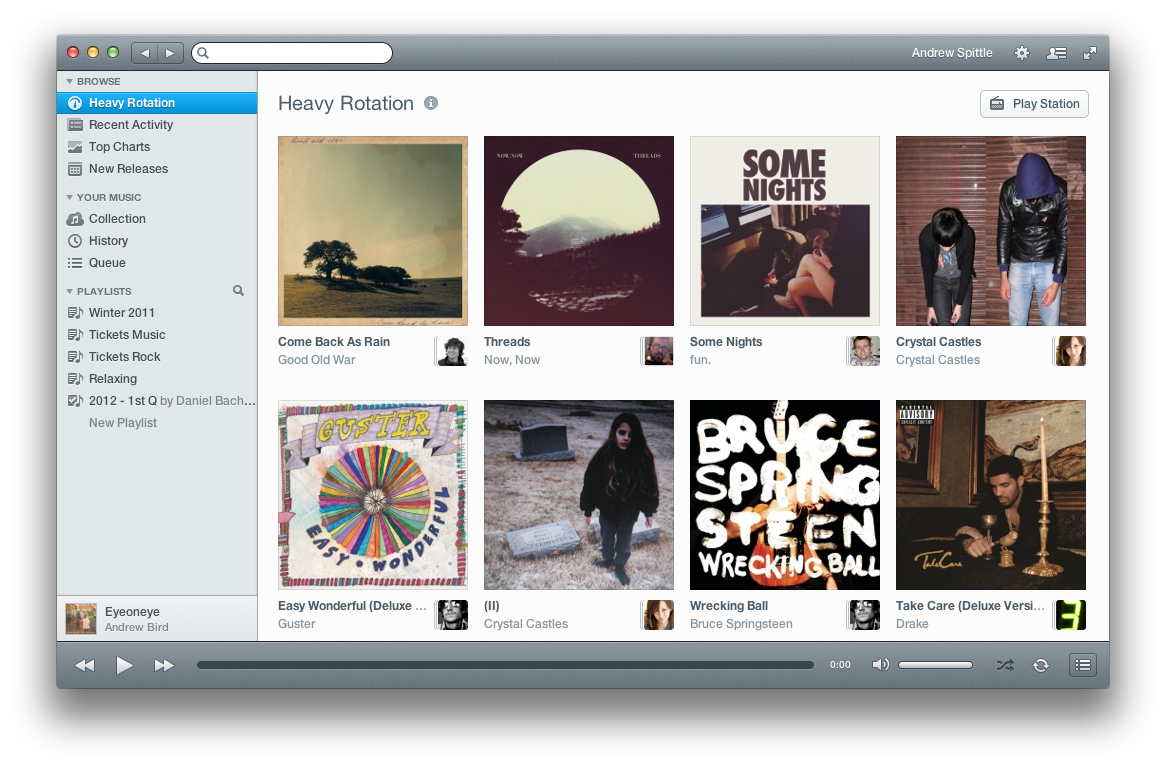 It’s no secret that I love Rdio. Today’s update makes it even more fantastic. The updates make it a smoother experience overall. Really looking forward to digging in to the changes more after SXSW.

I’m really enjoying Parov Stelar this afternoon. Props to Beau and Daniel for the recommendation. Great mix of horns and techno to work to.

The Hood Internet – Trillwave 2. I’ve had mashups on repeat this week. Something about the beats and quick changes that meshes well with support requests. A lack of mashups is one major failing in Rdio. (via Kottke)

Downloaded the new Kanye and Jay-Z album to my phone with in-flight wi-fi while flying up to Portland. The future is now.

I’ve used Rdio for about a month now. Earlier I wrote how much I love the service. I still do, it’s tremendous. When Spotify launched in the US I figured I’d sign up for their premium account and give it a shot for a month.

After a few weeks of using the service it’s clear that it’s not for me. I don’t like how Facebook determines the entire social graph. 1 I don’t like how it automatically crawled my iTunes library without my approval. 2 Mostly though I just didn’t like the service as much as Rdio.

Since my premium account was $9.99 a month I wanted to cancel it while it was fresh on my mind. Turns out Spotify makes it pretty difficult to do this. You first have to head to your subscriptions page. There you see this: 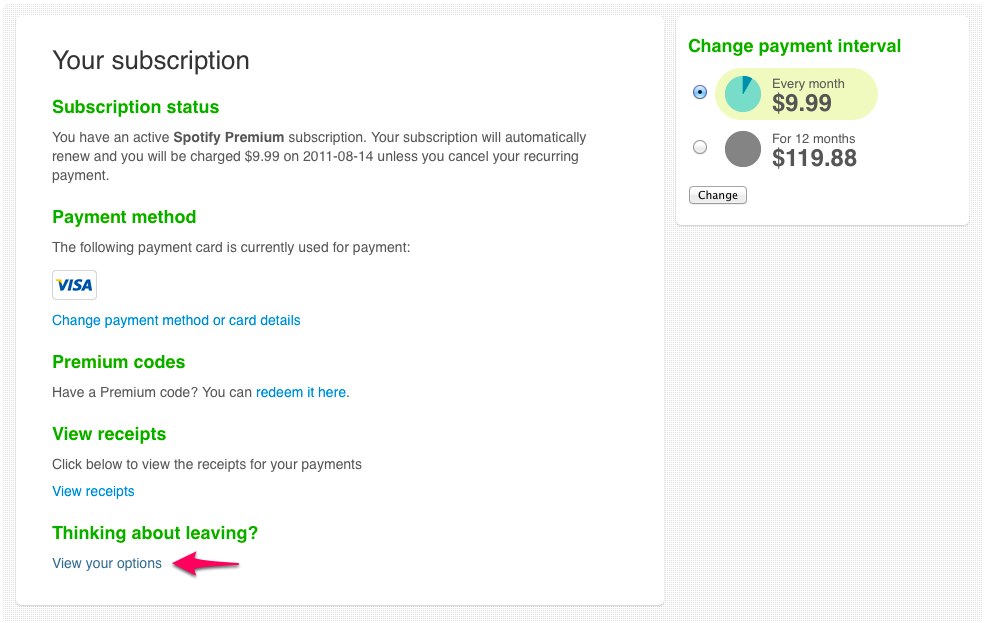 Silly me for thinking I’d find a nice “Cancel” link on that page. You have to go all the way to the bottom where you’re able to view your options for leaving. Okay, that’s not terrible. A bit obtuse of a UI, but I’ve seen worse.

That “View your options” link then takes you to this screen: 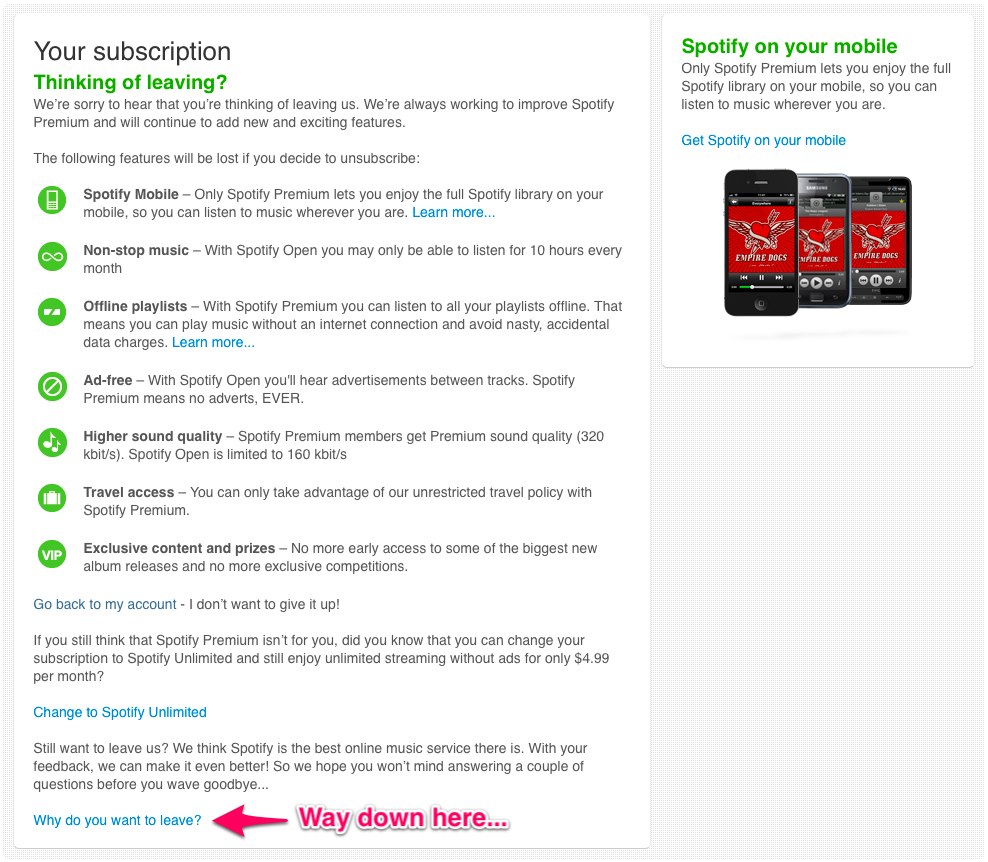 Alright, that’s just lame. I’m trying to end my paid subscription. I clearly already know what a premium subscription to Spotify offers because I already dealt with all the marketing copy when signing up. Bombarding me with the bullet points again seems desperate.

There’s still no cancel link though. I guessed that it was the “Why do you want to leave?” bit all the way down at the bottom. Turns out you have to go to this page where you then have options for telling Spotify why you are cancelling.

In contrast, Rdio has a Subscriptions tab in my account settings. There, right at the bottom highlighted in red text is a button that reads “Cancel subscription.” Simple. Easy. Intuitive.

When paying for web services trust is a huge factor. It may seem counter intuitive, but the easier you make it for users to leave the more likely they are to stay. They’ll simply trust you more for being upfront with them. Rdio understands this. Spotify clearly does not. Don’t hide vital account functions like cancellation behind tongue in cheek questions like “Why do you want to leave?” I know why, just let me do it and get out of my way.

Minor feature request for Rdio: I want to be able to add albums to my queue through the mobile app.

Rdio and my changing music habits

A while back I was reminded through Twitter of Rdio. I looked at it a few months ago but at the time was still stuck with my Palm Pre and didn’t want to pay for Flash only streaming. My how things have changed.

I’ve always had a massive music library. It approached some 14,000 songs before I culled it earlier this year. With all that music it’s funny that I never really listened to it all that much. For the most part I had a select group of albums that were played over and over again. The majority of my library was played once or maybe twice a year.

This is the first thing that Rdio has changed. Rdio lets me follow other users and see what they’re adding to their collections, playlists, and writing reviews of. It’s the digital equivalent of my time spent passing CDs back and forth between high school friends.

Rdio also kicks out recommendations based upon the music in my collection. Between these two sources of discovery I’ve found more new albums and artists in a week than I have in the last few months with iTunes.

The killer feature though is the ability to access all this as much as you want everywhere you are. With the web, Mac OS X, and iOS apps Rdio gives me access to all the music I want anywhere I am.

Instapaper is an app that has fundamentally changed the way I read and consume information. Having a single store of articles I want to catch up on that is available through the web, an iOS app, and my Kindle is exhilirating. Rdio does no less than that for my music habits.

If I’m hanging out with friends and someone mentions an album I can play it straight to my speakers immediately. I’m not out any money because the $9.99 a month Rdio charges gives me unlimited access to anything. The cost of browsing around for new music is essentially zero. I pay the same amount for taking a few listens to 100 albums and streaming my 10 favorites as I would for just cycling through my most-loved.

Sure, all this does mean that I’m outsourcing my music library to the cloud. But, it also means I’m not stuck trying to create a backup strategy for all those gigabytes of tracks. Also, if I want to I can purchase albums straight from Rdio for about the same price as iTunes.

Seriously, Rdio is like living in the future. It’s incredible.

Rdio streaming to speakers over AirPlay via my phone makes me feel like I’m in the future.

I keep a reading log of books, about one each week. I share the occasional bookmark of interest directly on this site. And while traveling I post the occasional photo.